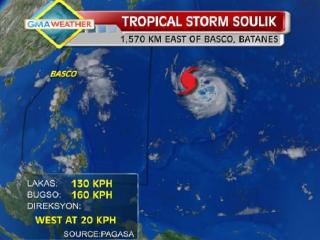 TS Soulik as of 5pm, 9July2013. As of Tuesday afternoon, tropical storm Soulik was located some 1,570km east of Basco, Batanes. It is expected to enter the Philippine Area of Responsibility by Wednesday morning, and will be locally codenamed Huaning. GMA News

PAGASA, in its 11 p.m. advisory, said Batanes in extreme northern Luzon remained under Storm Signal No. 1.

It was moving west-northwest at 20 kph and would be 640 km northeast of Itbayat, Batanes Thursday evening.

PAGASA said Huaning may bring rainfall of 10 to 25 mm per hour (heavy to intense) within its 800-km diameter.

PAGASA warned fishermen, especially those using small seacraft, not to venture to the northern and eastern seaboards of Luzon due to big waves generated by Huaning. — DVM, GMA News