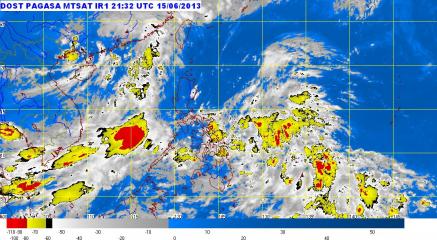 PAGASA: ‘Habagat’, LPA, ITCZ bring rain to various parts of PHL. PAGASA said in its weather bulletin early Sunday morning that the Bicol region, Central and Eastern Visayas and Mindanao will experience cloudy skies with moderate to occasionally heavy rainshowers and thunderstorms which may trigger flash floods and landslides.” PAGASA

PAGASA forecaster Jun Galang also said they are monitoring a cloud formation that could become a low-pressure area off Ilocos later this week.

While Tropical Depression Emong was too far to directly affect any part of the country, it would enhance the southwest monsoon, which will bring rain mainly to Luzon and Visayas.

He also said that as Emong moved northward, the weather in Mindanao would gradually improve while Luzon and Visayas can expect more rain.

Meanwhile, Galang said there was a chance a low-pressure area would form off Laoag in Ilocos Norte province later this week.

PAGASA’s 5 a.m. bulletin said that as of 4 a.m. Monday, Emong was estimated to be 300 km east of Virac, Catanduanes.

It had maximum sustained winds of 55 kph near the center and was forecast to move north-northwest at 13 kph.

“Mimaropa, Bicol region, Visayas, northern Mindanao and Caraga will experience cloudy skies with moderate to occasionally heavy rain showers and thunderstorms which may trigger flash floods and landslides,” it said.

It added Metro Manila and Ilocos, Calabarzon, Zambales and Bataan and the rest of Mindanao will be cloudy with light to moderate rain showers and thunderstorms.

The rest of Luzon will have partly cloudy to cloudy skies with isolated rain showers or thunderstorms, it said.

The coastal waters throughout the archipelago will be moderate to rough. — DVM, GMA News