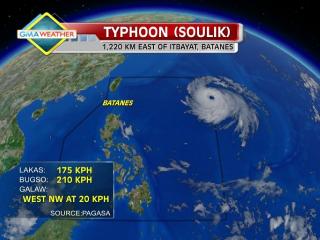 Typhoon Soulik enters PAR, codenamed Huaning. Tropical Storm Soulik, visible as a white circular cloud formation in the upper righthand portion of this image, passed into the Philippine Area of Responsibility at around 10am (PHT) on July 10. It has been given the local codename, Huaning. GMA News

PAGASA forecaster Aldczar Aurelio said Huaning is not likely to make landfall over the Philippines so long as it does not change its present course.

But he said Huaning has a diameter of 900 km and may bring heavy rain to parts of Batanes, which is under Storm Signal No. 1.

PAGASA’s 5 p.m. advisory said Huaning has maintained its strength as it moves in the general direction towards the Taiwan-Batanes area.

Huaning packed maximum winds of 185 kph near the center and gustiness of up to 220 kph, and was moving west-northwest at 20 kph.

PAGASA said Huaning may bring rainfall of 10 to 46 mm per hour (heavy to torrential) within its 900-km diameter.

“Fishermen specially those using small seacrafts are advised not to venture out into the northern and eastern seaboards of Luzon due to big waves generated by Typhoon Huaning,” it said.

Metro Manila and the rest of the country will be “partly cloudy to cloudy with isolated rain showers or thunderstorms,” it added.

Also, it said moderate to strong winds from the west to southwest will prevail over Northern and Eastern Luzon and Eastern Visayas and the coastal waters along these areas will be moderate to rough.

PAGASA warned of strong to gale-force winds associated with Huaning that may affect the northern and eastern seaboards of Northern Luzon and the eastern seaboard of Central Luzon.

“Fishing boats and other small seacrafts are advised not to venture out into the sea while larger sea vessels are alerted against big waves,” it said. — BM, GMA News