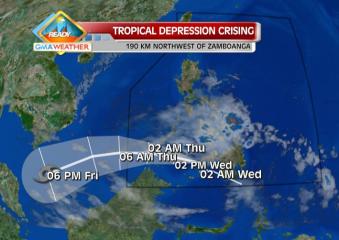 Tropical Depression (TD) Crising slowed down as it crossed the Sulu Sea before noon Wednesday, even as two areas were placed under Storm Signal No. 1, state weather forecasters said.

PAGASA, in its 11 a.m. advisory, said Tropical Depression Crising was estimated at 220 km northwest of Zamboanga City as of 10 a.m.

It said Crising packed maximum winds of 45 kph near the center and is moving west-northwest at 19 kph.

Under Storm Signal No. 1 are Southern Palawan and Zamboanga del Norte. Storm warning signals in other areas had been lowered, PAGASA said.

It said Crising may bring rainfall of 5 to 15 mm per hour (moderate to heavy) within its 300-km diameter.

“Residents living in low-lying and mountainous areas under Storm Signal No. 1 are alerted against possible flash floods and landslides,” PAGASA said.