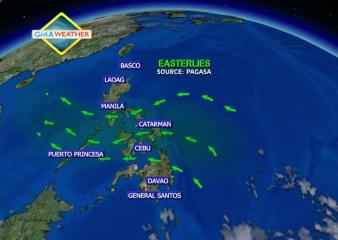 The transition to the hot summer season may come as early as mid-February —or sometime next week, state weather forecasters said Thursday.

PAGASA forecaster Aldczar Aurelio also said that while the northeast monsoon may make its last hurrah this weekend, it will not bring very cold weather anymore.

Once the northeast monsoon is gone, he said a high-pressure area or warm winds from the east may cause warm weather, he said.

But for now, he said the northeast monsoon may now be affecting parts of Northern Luzon and almost the entire Luzon this weekend.

“Asahan natin ang amihan pero hindi ganito kalakasan (We can expect the northeast monsoon to come but it won’t be as strong as before),” he added.

Easterlies, isolated rain in next 24 hrs

Meanwhile, PAGASA’s 5 p.m. bulletin said easterlies, or warm winds from the east, are still affecting the eastern section of the country.

“The whole country will be partly cloudy with isolated rain showers or thunderstorms particularly over Bicol, Eastern Visayas and the regions of Caraga and Davao,” it said.

The coastal waters along these areas will be moderate to rough.