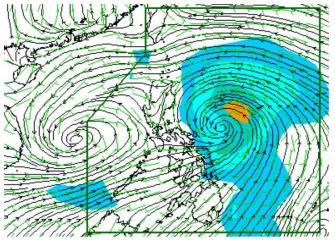 Typhoon Labuyo from the east, monsoon and possible LPA to the west. While Typhoon Labuyo comes from the east in the Pacific Ocean with 140 to 170 kph winds, PAGASA said the typhoon may enhance the southwest monsoon. Surface winds forecasts also show that a possible low pressure area may be forming just outside the Philippine Area of Responsibility far out to the west of Palawan. PAGASA

The National Disaster Risk Reduction and Management Council was placed on red alert Sunday morning for the possible effects of Typhoon Labuyo (Utor).

NDRRMC spokesman Maj. Rey Balido said a red alert was declared at 8 a.m., with all concerned personnel on standby.

He said those particularly on alert include disaster management teams in Ilocos, Cagayan Valley, Central Luzon, and Cordillera.

Also, Balido said teams from various government agencies are on alert and ready to respond to contingencies.

These include the Department of Social Welfare and Development, Armed Forces of the Philippines and Philippine National Police, he said.

PAGASA forecaster Glaiza Escullar also warned Labuyo is likely to intensify further, as it is still at sea and can gather more strength.

Meanwhile, the Philippine Red Cross said it has alerted all chapters and volunteers “to monitor and report (the) situation in their respective areas.” — LBG, GMA News