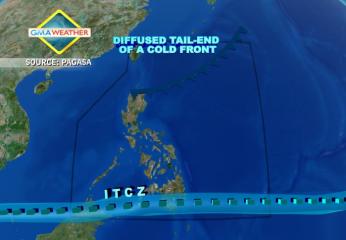 Although there is still no cyclone near the Philippine area of responsibility, residents in parts of northern Luzon and Mindanao may expect rain on Wednesday, state weather forecasters said.

PAGASA forecaster Bernie de Leon said the rain will come from a tail-end of a cold front affecting northern Luzon, while the inter-tropical convergence zone is affecting Mindanao.

In Metro Manila, he said there will be generally good weather but with isolated rain showers and thunderstorms.

Angeles and Olongapo Cities may expect temperatures of 25 to 32 degrees Celsius, it added.

PAGASA’s 5 a.m. bulletin said: “The regions of Ilocos, Cordillera, Cagayan Valley in [northern Luzon], Davao and Zamboanga Peninsula [in Mindanao] will have cloudy skies with light to moderate rain showers and thunderstorms,” it said.

It added Metro Manila and the rest of the country will be “partly cloudy with isolated rain showers or thunderstorms mostly over the western section.”

Light to moderate winds from the southeast to south will prevail over Luzon and coming from the east to southeast over the rest of the country, it said.

The coastal waters throughout the archipelago will be slight to moderate, PAGASA said. — LBG, GMA News